In vaudeville, everyone got a chance, even an untested act. Course that is one of the reasons vaudeville died, but everyone loves that backstage story. If someone is a big success and get too big, they have to be knocked down. Everybody loves that story too, but it doesn’t always play out like that, which brings me to the meteoric careers of Sarah Palin and Susan Boyle.

Boyle burst on the scene belting out ’I Dreamed a Dream’ from Les Miz which went viral on the internet overnight and propelled her to international stardom. Unused to instant success and pressured to repeat it, she instantly suffered a backlash from overexposure and her voice started cracking, and her make-over looked draggy from the kleiglights.

Boyle did the only thing a diva in training should do at that point– she had a public nervous breakdown and used the time to become media savvy enough to make such a comeback that it made her star shine even brighter. The fact that she sings everything the same way, with dodgy range to boot is beside the point. People love her story.

More improbable than Boyle’s international success is the iconic political status Sarah Palin achieved in one election cycle. She was a cynical VP pick by a desperate John McCain who cared about nothing but winning and when he saw that was impossible, deflected the attention to someone who would recharge his campaign. McCain was jaded enough to know that she would become an instant media star, however untested. Maybe the only credential she could show as a future Veep.

After the election Palin didn’t shrink back to Alaska after the election. She proved transformational enough to broker big money and influence in back of her for staying power no matter how vaporous her politics. People loved her story and she was able to walk on all of the political quicksand that was engulfing Republicans and Democrats alike. She cast herself as the antiObama and saw an opening for his job. She stalked away from her governorship to lay the groundwork for the presidency.

Her premature retirement may have been the first real ripple in the tide turning against her. Even people who thought Katie Couric was ’out to get her’ because she pressed Palin on what magazines she read, didn’t like it when Palin walked away from an elected position. Still, she endured as the economy got worse. People didn’t seem bothered that she made up facts to attack the Obama presidency. They hung on her every word.

They weren’t disturbed by her incendiary creative rhetoric or that the only death panel was the one in her head. They listened to her vaporous speeches and didn’t demand that she articulate what she was advocating. She never gave policy speeches. Her calling card was to attack, ridicule and tear anyone on the left apart.

People also didn’t seem bothered that when there was a pushback, even in the form of a policy rebuttal Fox News would report that Palin was being attacked. Her ‘you betchas’ and ‘lame-stream media’ shtick stuck.

But earlier this year there started to be reports of fickle fans tired of her same old record and the fact that she was being paid big bucks to lip-sync it all over the US. She didn’t offer any solutions, just hits and runs against Obama and homilies about taking back the ‘real America.’

Her Tea Party picks did very well and just weeks ago Palin studiously told Barbara Walters that she would run for president if the people wanted her. If there were a void. She filled that void for two years as the voice of the conservative movement. Her conclusion to Walters was that she could beat Obama.

That was so two weeks ago. That was before the American public saw the Congress and the Senate actually working. In the year end polls, Palin’s backlash is starting to take hold. Of the most compressive CNN and PPP end year polls tracking her chances for a 2012 Presidential bid, she clocked only a 33 percent approval in her home state Alaska. She would be the loser, by large margins, in every state. So you have to wonder if the public is thinking that Palin just sings the same old song. Is her reality show being canceled or optioned? In politics one never knows, do one.

My prediction is that Palin will end up on American Idol in 2012. Boyle should be a judge by then. Maybe Susan can lend her the sheet music. 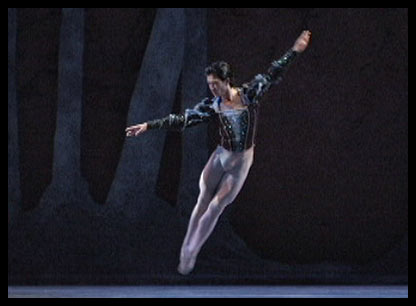 Black Swan is the dance movie of the year (kudos to those PABallet dancers in the cast) but there was actually another that was just as interesting called Dancing Across Borders. It is the inspiring documentary about Sy Sar who became the first Cambodian male to dance professionally in a classical ballet company in the West. His journey from a farming life in Cambodia to the International Ballet stage is as improbable as Russian dancers defecting from the USSR in the 60s.

Director Anne Bass spotted him in a small community dance troupe while she was visiting Angkor Wat. Sar had such a luminous stage presence and natural facility, she couldn’t stop thinking about him. Bass had a background in dance and connections at New York City Ballet.

Bass arranged for his training at New York City Ballet’s School of American Dance Olga Kostritzky master Russian classical coach. Sy didn’t know English or ballet vocabulary and also had to adjust to the culture shock living in New York. Many of his tutors never really believing he could make up for all of the lost time to be a professional ballet dancer. He proved them wrong and was hired at Pacific Northwest Ballet in Seattle under Boal‘s guidance.

Bass captures the arresting beauty of Cambodia and she also make the dance studio visually interesting. Moving interviews with Sar’s parents, classmates and teachers and equally stirring stories of Cambodia’s reclaiming its cultural history from the ravages of life after the repressive Khmer Rouge. This film is an inspiring portrait of the power of art and a young man’s determination to change his life.