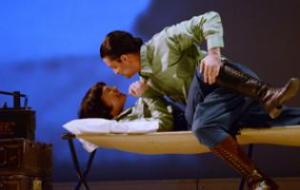 Mozart rarities in Philly this month with a concert version of Oberto by AVA and a flapper-era production of The Abduction of the Seraglio by Opera Company of Philadelphia and Teatro Comunale of Treviso. OCP’s director Robert Driver sets it in the 20s Istanbul, by way of silent film as interactive backdrops. Konstanze and Blonde, the lead women, using their wiles as foreign spies instead of as mere sex objects.

“I wanted to bring a fresh new look to Mozart’s comic masterpiece which launched the German comic opera in Vienna in the 1780s. my team of creative colleagues – costume and scenic designer Guia Buzzi, projection effects designer Lorenzo Curone, we decided to draw on the world of early Hollywood cinema in order to tell our romantic, swashbuckling, rescue story.“ Driver explains.

Elizabeth Reiter, 24, plays the scheming Blonde with her silvery soprano, has already landed major roles with OCP, plays her first buffo role. Cosmin, the overlord (with the hilarious Danish bass Per Bach Nissen) tries to seduce Blonde and not only does she file her nails on his ego, she canoodles all the more with Pedrillo.

Reiter talked about the challenges and the funsies of playing the part at OCP studios this week. “Vocally, it has its challenges, but the character of Blonde helps. Mozart was still finding out how to write for the voice, so this role goes very high and when she’s imitating Cosmin, it goes very low. The staging and this interpretation of the character lends itself very well to the music. And you see hints of what is to come with Figaro and Giovanni.”

Even though Blonde is comic relief, she gets to play some steamy scenes with her lover Pedrillo, played by Polish tenor Krystian Adam. “Yes, we get to do it in front of three thousand people, just part of the job. It’s tricky but this mixes serious opera and comedy. Blonde is a little one-dimension, so we tried to find more in the comedy to contrast.

The lovers contrast the more somber star crossed affair between Konstanze, played by 2012 Met finalist Elizabeth Zharoff, (a soprano, who like Reiter, studied at the Curtis Institute) opposite Spanish tenor Antonio Lozano, as Belmonte.

“When I see Elizabeth backstage, and she’s singing about these dark themes, it’s like we’re in two different operas.” Reiter said. “Blonde is a little one-dimension, so we tried to find more in the comedy to contrast. the story gets of ‘damsels in distress’ and this production we’re military spies who have been captured it gives us power and having the upper hand. Better than being the tragic heroine,” Reiter said. “With Robert’s productions he can bring something different to it without compromising the music. I love the 20s style and silent film era, it was rather perfect- especially with the movie the Artist coming out now.”

Reiter got raves last year in a new chamber opera of Phaedre last year, is very committed to new opera by contemporary composers. “So many young composers were at Curtis and it was very exciting hearing where opera can go. I think also there is something to be said about singing new music and to put our stamp on more historical music,” she said. For now she is stuck in the past for a while. After Philly, Reiter heads for Frankfurt, Germany where she will appear in The Magic Flute, then Wagner’s Ring Cycle.

The Abduction from the Seraglio
Academy of Music, Philadelphia
Through Feb. 26 ~
http://www.operaphila.org

Nothing erases a Philly grey day, like a clouds breaking up & a misty over the Schuylkill River. Biking over the South St. Bridge, hard to keep my eyes on the road- stealing moments of the gorgeous skyline, mysterious and rather luminous tonight when that old devil moon, directly overhead, was breaking through those Universal Studio clouds. Then on the serenely beautiful Penn Campus for the Eddie Palmieri Latin Jazz Orch. concert at the Annenberg which was pretty much sold out. Great crowd & just master musicians. Even though there were sound/tech problems, it was bothering no one but the 75 year old master of Afro-Carribean music, who said that the audience and his superb band deserved that it should be correct. There were equalizing problems and feedback moments, but over-riding them with sheer musicianship, Mr. Palmieri & co. cut their losses and played one sizzling, scintillating and memorable set. Mr. Palmieri’s piano just wending every which way to take us to that silvery moon and back before we knew what was happening. 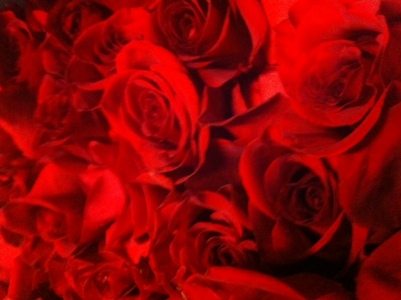