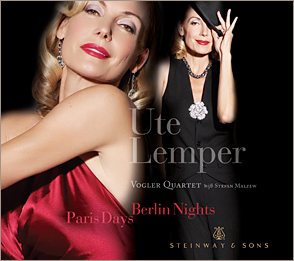 You have to experience Ute Lemper live to appreciate the full effect, but her new CD “Paris Days, Berlin Nights” gets close to what she conjures onstage. Pristinely recorded over three days in February of this year, the sessions capture the genuine artistry of an all but forgotten musical era. This is not a desiccated world of Hollywood’s image of 30s Weimar and Parisian cabaret, but a vibrantly liberated arts world expressing love, lust, loss, war, resignation, yearning and escape.

Lemper is accompanied by the string chamber group The Volger Quartet with Tim Vogler and Frank Reinecke (violin), Stefan Fehlandt (viola), Stephan Forck (cello)- with arrangements by Stefan Malzew, who also plays piano, accordion and clarinet on these songs.

She hypnotizes on such lost gems as “L’Accordeoniste” accompanied by Malzew in a carnivale waltz that eventually ends in a crashing vocal meltdown. Such oft distilled material as Weill-Brecht’s ’Surabaya Johnny & Die Moritat von Mackie Messer’ (Mack, the Knife) so softened over the years, is restored to its grotesque beauty.

Jewish Kabarett songs are the most revelatory on this CD. ’Temnaya Noch’ (Dark in the Night) with music by Nikita Bogolovsky and text by Vladimir Agatov is a war scene of a desperately private moments of a couple shielding their baby from dodging bullets as the Nazis roll over the steppes. Lemper is riveting in this whispering, heart wrenching lullaby. ’Ikh shtey unter a Bokersboym’ (I Stand Beneath a Carob Tree) by Polish-Israeli composer Chava Alberstein.

Lush violin accompaniment for Jacques Brel’s ’Ne me Quitte Pas’ (If you go away) as Lemper pays homage in a tormented reading ala Brel, with a sweaty, boozy performance. Lemper’s range goes from sultry whispers that is completely intoxicating to tour de force vocals that may come over as overwrought, but are true to the period genre and boffo cabaret diva. This is a haunted and elegant recording of rescued repertoire that showcases the indelible artistry of Lemper and the Volger Quartet.