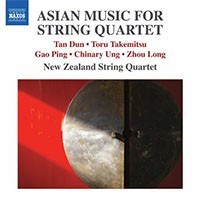 Composer Zhou Long was one of 100 student musicians out of 18,000 applicants to be the first to attend the newly reopened Beijing Central Conservatory in 1977, a year after China’s Cultural Revolution. In the 80s, he led the musical mission of introducing ancient and contemporary Chinese music to the West.

Long became director of Music from China at Columbia University. His own 1982 composition Song of the Ch’in is the intoxicating opening track of the New Zealand String Quartet’s new release Asian Music for String Quartet with a theme of ancient music fused with contemporary compositional forms.

Ch’in (gin) is a traditional Chinese seven-stringed, plucked zither and is transcribed for string quartet to explore its essential musical qualities of range and timbre to modern audiences. ‘Song’ tells many musical stories past and present, and time-traveling artistry. It also is demonstrated how versatile this quartet is in reproducing the austere earthiness of the ch’in voicing.

It is the perfect prologue to Cambodian-American composer Chinary Ung’s Spiral III (1990), an intimate and bio-historical work. Ung, in fact, is compressing cultural markers of memories of Cambodian villages and culture of his childhood and the impending genocide of the Khmer Rouge. This courageous piece has a soul-searching arc that documents incomprehensible human tragedy and climb out of it with renewed purpose. It unfolds in tremulous and spikey string clusters. The stunning technique and theatrical refinement in the playing by NZSQ just haunts your senses. This is a modern masterpiece.

Pianist-composer Gao Ping also contemplates time and borders in Bright Light and Cloud Shadows (2007). Pohl and Beilman’s taut violin lines fly to a vanishing point or stay jagged in the resolves are interlocked with Ansell’s chromatic viola, while Gjelsten’s rich descending cello line appears and vanishes. You wonder if Ping composes on piano because he writes so vividly for string quartet.

NZSQ includes the ethereal A Way a Lone (1981) by Japanese composer Toru Takemitsu, the only deceased composer on this collection. The title is from a line in James Joyce’s Finnegan‘s Wake and Takemitsu was originally commissioned by the Tokyo String Quartet. Takemitsu’s is a tonal tragedian and this has cinematic grandeur and the intimacy of a chamber piece.

Tan Dun’s Eight Colors is packed with splashy effects; even without his trademark instrumentation (stone, paper, water, et al) Dun’s eight vignettes start with “Peking Opera” which give a clue that they are literal narratives in miniature. They seem truncated because they are so evocative that they leave you hungry for more. “Zen” has a meditative (om) seed sound running through, even though it sound-morphs to what sounds like, but can’t be assumed as, distortion. It bleeds into the menacing pizzicato and instrument claps of “Drum and Gong” the interlude before the whip-lashing, bent note of cloudiness, with its suspended approach, that accumulates to some sonic doom. In “Pink Actress” string lines that vault or fall or ping vaults with wry stoicism. “Black Dance” is a thriller of galloping piques and clusters. “Red Sona” has volcanic but playful string roundelays that twirl, seemingly, off a cliff.

NZSQ recorded this at St. Anne’s Church, Toronto, Canada in the summer 2010 and is well engineered by Norbert Kraft. You can only hope that they tour this repertoire at some point.