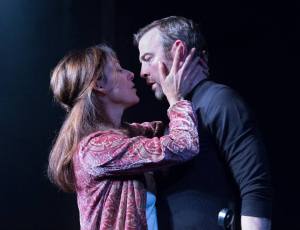 Clarke & Peakes as the plotting Macbeths

Of all of Shakespeare’s plays that spin on political corruption and murderous betrayals, “Macbeth” may be the adaptable to any number of historically craven regimes. The current production at the Arden Theater, directed by Alexander Burns, turns up volume on both the real and psychic costs of megalomaniacs in power.

For those not already lured by Shakespeare‘s language, the Arden production boasts visuals that could give the movies a run for their weekend box office. These elements will appeal to young audiences weaned on hi-def flash and graphic gore. Burns, artistic director of Quintessence Theater, effectively uses elements of physical theater to tell much of the story.

Macbeth’s potent atmospherics start right away as the Three Weird Sisters appear and vanish out of the foggy stony circular stage portending ill winds at court. Presently, fully armored soldiers do battle with the actors sometimes suspended in slo-mo or freeze frames. Burn and fight director Paul Dennhardt give the movement visceral full on choreographic ’attack.’

Meanwhile, Duncan, the King of Scotland, assembles his castle court as Macbeth, his general, and his wife plot to murder him in his sleep and seize the crown. Faster than you can say soliloquy Macbeth and Lady Macbeth set up their corrupt tyrannical regime, dispatching anyone else who gets in their way.

Being Shakespeare, ultimately, the play’s language is the thing and different approaches by various actors can lead to erratic focus and pacing on opening night. Ian Merrill Peakes’ Macbeth seemed tentatively lyrical in the front scenes as he and Banquo debrief coming off the battlefield. Peakes’ locks onto a more naturalized Shakespearean cadence as soon as Judith Lightfoot Clarke, a most alpha Lady Macbeth, enters the picture. Their chemistry together and particularly Clarke’s vocal prowess (and hypnotic physicality) take command.

Ben Dibble as Banquo, also initially seemed to be in his own zone with the lyrical dialogue, but soon enough dove deeper with clarity and chilling invention. As Macduff, the Scottish nobleman, Terence MacSweeny is a most passionate Scottish avenger, even if his accent is all over the place. Carl Clemons-Hopkins’ steely baritone as a most noble and imposing Ross. As Malcolm, Duncan’s son, Josh Carpenter is a quieter volcano, roiling with passion as he plots to reclaim national honor.

Taking full bardian vocal control from the outset is Christopher Patrick Mullen as King Duncan (reminiscent of post-mannered Gielgud) proves a chameleon in his other roles as the hilarious punch drunk castle porter who hallucinates that he gatekeeper to hell, then as Hectate, who operatically orders the sisters in their evil ways.

As the Weird Sisters, E.Ashley Izard, Aime Donna Kelly and Mary Toumanen make the most of their uber-cool dance as they rap the “double, double, boil and trouble/cauldron bubble” text. You wonder how editorial Burns intents when ominous specters are summoned by the witches spells, including, at one point, having a phalanx of figures in burqas floating over the stage.

Peakes’ forceful interpretation rules the second act as he unspools the dimensions of Macbeth‘s villainy. At their first court masquerade ball, Macbeth is haunted by his treacherous deeds and Peakes unlocks all of the dark chambers of Macbeth, the soliloquies masterfully delivered, most notably, ’Tomorrow and tomorrow’ as Lady Macbeth lies lifeless before him. Clarke is coldly mercurial until guilt drives her to madness. During the “Out, out damn spot” scene, Clarke delivers a performance of modern sensibility and classical depth. It is hard to take your eyes or ears off of her.

Rosemarie E. Mckelvey’s costume design kept giving with a mix of breastplates and molded leather armor contrasted with Lady Macbeth‘s drop-dead vermillion velvet gown and in the ball scene, metallic Venetian masques. Brian Sidney Bembridge minimal scenic design of the circular stage, metallic spires and minimal castle design around the vaulted medieval chandelier, work very well. There is a cinematic scope to the sound design by James Sugg, combined with Solomon Weisbard’s lighting, punched us into Shakespearean dimensions more than once. Burns could tighten the pacing of the play’s shorter exposition scenes, but without doubt this is an unblinkingly brutal Macbeth that reflect our time. 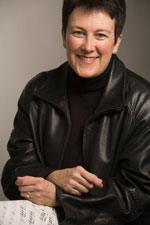 What could be a more potent evening of a mix of music by Claude Debussy and Jennifer Higdon, so it was disappointing to see empty seats in Verizon Hall for the first of three concerts.

Hidgon has commissions world over, lives in Philadelphia and couldn’t do us more proud as not only one of the composers of her generation and at the height of her creativity. Higdon was on hand for the pre-concert series LiveNotes, to talk about music with Robert Spano and soloist Benjamin Beilman, a virtuoso 25 year old was playing Higdon’s 2010 Pulitzer Prize awarded Violin Concerto which she composed for the towering talents of Hilary Hahn in 2008, also a Curtis alum.

The concert opened with a rote reading of Debussy’s Sunken Cathedral a lush tone poem (orchestration by Stokowski). The piece had a studied quality in the first half, but fully bloomed with those full symphonic surges awakening its mystique. In contrast, the orchestra locked instantly in fiery form with Higdon’s Violin Concerto, over three movements that shape -shift conventions and bristles with unexpected musical ideas. The first movement, 1726, is titled for the street address of the Curtis Institute, a musical homage to the roster, past and present, of Curtis’ young virtuosos.

Beilman carving those scratchy, exploratory string lines, surfing the edge of dissonance, then gliding with sonorous command. Hidgon devises not only a framework for the soloist, but on an equally compelling parallel violin track played by associate concert master Juliet Kang. Kang and Beilman weave in and out of the concerto’s orchestral crosscurrents that never engulf; Higdon’s chamber music inner circle of lead cellos, violas and violins in sumptuous interplay.

There are effects with celesta and xylophone simmering and fast fades to lingering bent-notes that echo Asian minimalism. Beilman’s lead breaks to torrential solo passages of fiendish speed (the breakneck technique required a given). His mature tone and phrasing displaying both control and interpretive skills.

Higdon came onstage hugging Spano and Beilman to a rowdy and deserved standing ovation. Higdon’s Blue Cathedral is her somber and serene tone poem and musical elegy. The arc of this is Debussian, ethereal lower strings, eloquent and serene lines with the players fading out by ringing metal ball cymbals.

As fiery and detailed as the orchestra performed the first movement of Debussy’s Iberia, the following two sections struck as underpowered and even hazy at key points. But, this fade-out hardly takes away from an altogether vibrant musical evening.