PABallet’s Court Dances
Pennsylvania Ballet
Grace and Grandeur
Merriam Theater, Philadelphia
April 5, 2018
The Pennsylvania Ballet was a near sell-out at the Merriam Theater for their Grace and Grandeur program, artistic director Angel Corella’s showcase for classical court dance lineage laced through Marius Petipa’s Paquita which premiered at the Bolshoi in 1847, George Balanchine’s Theme and Variation 1947 first staged at Ballet Theatre in New York, and even laced though moments of Christopher Wheeldon’s 2006 virtuosic male quartet in For Four.

As old as Paquita is, it bypasses being a brittle period divertessment through the effervescent of Ludwig Minkus’ ballet music.  Even though conductor Nathan Fifield and Ballet Orchestra brought out all of its musical elan, the corps de ballet women, uncharacteristically, struggled up front with ensemble unison, wayward pointe work and scrambled pacing in the transitional steps. In contrast, featured dancers Nayara Lopez, Yuka Iseda, Oksana Maslova and Alexandra Hughes followed with their solo variations, all performing with glittering technique.  Kudos also to exquisite harp solos by Mindy Cutcher.  In the concluding ensemble scenes, the corps de ballet returned with more cohesive focus, especially sharp on Minkus’ showdance prestos.

Of course, most of the focus is on Principals Mayara Pineiro and Arian Molina Soca exuded so much charm, their technical artistry and chemistry conveying virtuosic command. The Merriam stage seemed to confining for Soca in his thrilling jetes around the perimeter. And huge scissoring battement and stag leaps, and signature saute de basque sequences. An extended turn sequences did fall apart in its final rotations, but by then the audience was already dazzled for good reason. Pineiro’s fiery artistry and deportment is breathtaking. Pineiro nailing over 30 fouettes (many with lashing double turns) like a spinning diamond. 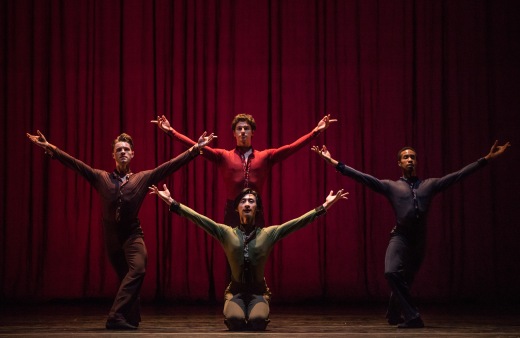 Sterling Baca is stoic and steely in his technical artistry.  Zecheng Laing a most lyrical dancer as his body arcs to the side, then he bolts over the stage in razor sharp allegro steps. Jermel Johnson in graceful command with unfussy and floaty jetes and entrechats. Peter Weill’s at ease phrasing the definition of  fleet and assured technique.

This piece was built for modern danseurs, and Corella was in the original, but when it is stars outdoing each other it doesn’t come alive, but this foursome was as ‘connected’ as the strings in Schubert’s score, led by the master violinist Luigi Mazzocchi.

Theme and Variations is one of Balanchine’s more inventive ballets in its distillation of Russian Imperial Ballet classicism. Balanchine is straightforward in showcasing the dancers without tangling them up as he does in many of his larger works. But the quick tempo classicism does require clean and sustained technique is a glittering showcase for both the corps de ballet women and men. Throughout the Balanchine’s morphing ensemble geometrics, the unison lines, pointe work and group port de bra, the corps de ballet women on top of their game in Theme and Variations. The full mens corps also near perfection in their unison jumps and deportment in the ballroom partnering sequences.

Baca was back, most impressively and his partner Dayesa Torriente deepened their onstage chemistry after their dazzling performances Siegfried and Odette/Odile last month in Swan Lake.

Corella’s range of updated classical repertory has been paying off artistically and commercially. Just a month after his streamlined version of Swan Lake, a retro-update styled after Petipa/Ivanov definitive version, was a near sell-out even with questionable edits to the score.  Next month he mounts Jewels, George Balanchine’s three ballet opus with its penultimate distillation of Imperial Ballet Classicism in Diamonds.