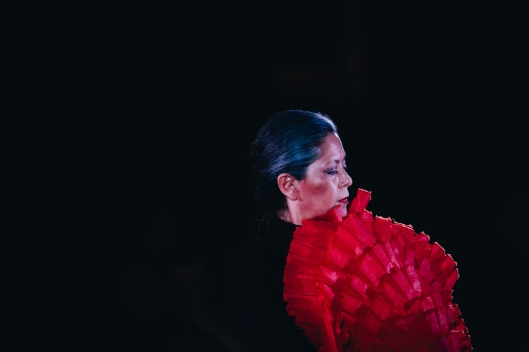 Pasión y Arte is choreographer-dancer Elba Hevia y Vaca’s Philadelphia-based flamenco troupe with international reach in their concerts, café tablao and collaborations that continues to explore traditions and new expression in flamenco dance and music. Hevia y Vaca’s collective has a feminist sensibility that in fact has always been an integral aspect of the art form.

Past and present came stunning together in Pasion y Arte’s concert last weekend titled My Voice, Our Voice | Mi Voz, Nuestra Voz a co-presentation with Intercultural Journeys presented at the majestic basilica at the Episcopal Church in West Philly May 18-19. The program quotes a poem by Virginia Woolf’ as the thematic key “The history of most women is/Hidden either by silence, or by/flourishes and ornaments that amount to silence.”

‘Compas –solea por bulerias’ a percussive a capella duet with dancers Sarah Candela and Jeanne d’Arc Casas. They use ‘compas’ (hand clapping) to establish the rhythms as they dance  solos and unison patterns. They also move in close to the audience, establishing an intimate synergy with the audience.

Next was the first musical interlude by the band, an altogether transporting composition ‘Odisea’ the first of Arnold’s original music in the concert. Followed by ‘Bulerias’ a fiery solo by Candela, which she dances and also sings. Candela conveys a more improvisational, almost conversational artistry with less theatrical phrases, her personality expressive and non-intense, even as she polishes off phrases with classic flamenco moves.

Singer Barbara Martinez enters in a stunning champagne flamenco dress with cascades of fringe ala the jazz age, and starts to sing and dance. Pasion generally uses male cantors with the husky (affila) vocals. Martinez at the other end of the vocal spectrum, with a golden center soprano, both earthy and ethereal, so expressive and sublime with these musicians.

‘Manton’ showcases Elba Hevia y Vaca and Annie Wilson’s fusion choreography. The beautiful embroidered silk shawl with long fringe, the manton, is symbolic of many things in flamenco. Wilson has an iridescent white one that she is curled up under as Hevia y Vaca enters, peering  mysteriously  over a black and red floral one.  This is a modern duet in bare feet and they free dance around each other.  They lock eyes and Hevia y Vaca’s strikes a flamenco pose, she drapes her manton over Wilson’s and it becomes a hand puppet dancing to the wending guitar and percussion lines.

‘Bata de Cola’ is the ruffled train of a flamenco dress, and Wilson unceremoniously comes onstage and climbs a red dress flamenco one as Elba enters in a maroon cola. They pull the ruffles up and their face and bodies are swallowed in, protection, symbolic of power, sexuality and dignity, it frames their inviolate dignity even as they crash down and scrub the floor with the train, then lay on it as if it were a field of flowers, then curl in it as if in a cocoon.

Costume designer Patricia Claire Dominquez use of traditional (and stunning) flamenco dance dresses, with contrasting contemporary unadorned dance togs, is inspired. In the after talk with the audience, Hevia y Vaca speaks of women having to hide themselves in clothes for society’s approval.

‘Tangos de Granada’ with Martinez singing dancing with lyrical upper body expression and flamenco hand choreo (florea) and her soaring vocals.  She is joined by Candela in a flirty lyrical dance with a silk fan, sweeping over the floor in elegant, fiery patterns and splitting atoms with her footwork. D’ Arc Casas enters in a stunning red and blue dress with a voluptuous cola she whips around her body during forceful turns and she kicks up defiantly. Candela also performed a thrilling segment with a pink Manton she flared around her body like a matador cape. Their choreography movements becomes more intricate and their interplay with the musicians simply spellbinding.

The musicians and dancers form a circle for their bows and  with a joyous free dance, each taking an exit solo, included Jeremy Smith flashing a few body percussion moves.

A co-presentation with Intercultural Journeys, a performing arts organization whose mission is to bring together diverse artists and audiences. Pasion y Arte’s concert was the finale of their current season, with the ironic theme “Borders and Boundaries.”  Of course, the point being both those world realities are vaporized by these stellar artists through the universal languages of music and dance.

For information about upcoming performances and events check their websites-