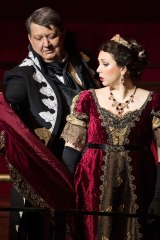 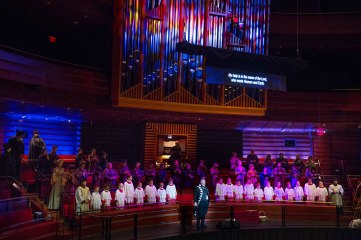 Since Yannick  Nézet-Séguin became musical director of the Philadelphia Orchestra five years ago, he has tried to stage operas in Verizon Hall, by design not easy, since the orchestra is not in a pit, but onstage during performances. It works well enough with minimalist operas like “Bluebeard’s Castle” and “Electra” where the singers able to perform in front of the musicians, but more  problematic for the semi-staged production of Puccini’s Tosca, in a semi-staged production with the singers ensconced on a platform in the choir loft. Stage director David Alexander having to move the cast block the loft tiers, making the scene focus diffuse and somehow static and scrambled at once.

On the ps side the orchestra is in sight for the whole performance, a rare chance in grande opera to take in aspects of singers-conductor- orchestra dynamics. Further, Nézet-Séguin is able to vault the orchestra’s voluptuous sound, and otherwise igniting Puccini’s symphonics at the outset. Nezet-Seguin specializes in equalizing large scale classical pieces with famous stand alone passages familiar to concert hall audiences.  Tosca’s famous arias and dramatic passages are landed in context by the Philadelphians with precision and balance, relative to the entire score.

And handling the most dramatic ones, Soprano Jennifer Rowley as Tosca, and stepping in at the last minute for an ailing Sonya Yoncheva.  At the May 16  Rowley seemed detached and with little passion in Act I’s scenes with tenor Yusev Eyvazov, who played her artist lover, Mario. Since Flora Tosca is a singer herself, Rowley was a bit underpowered and detached portraying flirty jealousy. She made up for it in Act II when she tries to save him from being tortured by Baron Scarpia, starting with her ‘Vissi d’arte’ aria.

The drama begins as Cesare, bass Richard Bernstein  (making the most of his short dialogue passages) an escaped political prisoner is being hidden, in the church by a sousey Sacristan. In pursuit is Scarpia, wealthy chief of police, who suspects that Cavaradossi and Flora are withholding information.  Scarpia arrests Mario to force Tosca to talk about what she knows of Cesare whereabouts.

Baritone Ambrogio Maestri is the dastardly Scarpia, who later blackmails Tosca into being his lover.  She bends to his will as she hears Mario being tortured in his cell. Rowley and Ambrogio have great adversarial chemistry. Scarpia can certainly be portrayed with over the top villainy, but Maestri tamps that down as an actor and vocally to his characterizations, his baritone bringing subtlety and breadth.

Rowley has to be convincing leading him on until she can make a move to help Mario.  She unleashes  her soaring gold soprano, particularly commanding upper vocal range surfing over Puccini’s the orchestral crescendos. Yusev Eyvazov’s brings the house down in the famous “E lucevan le stelle” aria with thundering classic tenor drama.

Bass Kevin Burdette is used as comic relief as the Sacristan, swigging from a flask and flouncing about as he leads the choir to distracting the guards & protect Caesare.

Director James Alexander lets the Philadelphia Boys Choir scamper around the seats and rock out a bit for their sacred hymn “Te Deum.” The adult members of the Philadelphia Symphonic Choir are costumed as soldiers, police and townsfolk, but there is not much for them to do. Boy Soprano Ethan Lee appears as Shepard in Act II in perfect voice, both ethereal and earthy.

Nézet-Séguin was animated and even had a few new dramatic conductor moves to punctuate the crescendos. He looked like he was having a great time, going for every dimension of the score, despite production limitations. Among the standout soloists Jeffrey Khaner (flute), Hai- Ye Ni and Priscilla Lee, lead cellos, CJChang, viola,  David Kim, violin; Richard Woodhams, oboe and the breathtaking horn herald that launches Act III by the always masterful Jennifer Montone.

Nézet-Séguin is now conductor designate at the Metropolitan Opera and has already been putting his stamp on the Met Orchestra. Meanwhile, he is showing equal flair in the sustained clarity, detailing and character of Puccini with The Philadelphians. In fact, so assured, that even though Yannick had the score in front of him, he barely seemed to look at it.

Other issues swirled around the three performance of Tosca and the regular concert season closing concerts with piano superstar Helene Grimaud.  The performances were met with protesters objecting to the orchestra’s tour of Israel, because of current policies concerning and conflict with Palestinians.  The orchestra asserts that their tour is not political and their mission is one of musical diplomacy.  Stay tuned.