The Wilma Theater’s premiere run of Christopher Chen’s ‘Passage’ closed earlier this month. & in the days after I wrote my review of the production, I couldn’t stop thinking about it & tinkering, not really sure I was unpacking all that was happening in the play.  While doing this, I let too much time pass to place the review on one of my regular theater outlets, but am posting it finally because it is in the final analysis this production was not only thought provoking, unexpected and brave theater that confronts profound issues of our time, even as it strips off the veil of theatrical conceits~ Lew 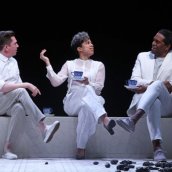 At the Wilma Theater, director Blanka Zizka’s HotHouse ensemble of actors develop new material ala a repertory company, working on a continual basis in the studio even  between productions. The theatrical equivalent of dancers taking morning class, exchanging ideas and developing methods and skills in the allied arts.

Since its inception, Hothouse has tackled a wide range of new material that isn’t necessarily trending in regional theaters around the country. Christopher Chen’s ‘Passage’ for instance, busts through a number of conventions- including Chen instruction, for instance, that the actors not be typed by sex or ethnicity, meaning  any actor, can play any role. The characters in the play are identified only by their initials.

‘Chen’s 2014 play ‘ Caught’ was a funny, biting satire about western appropriation and exploitation of Asian Art, and a hit at InterAct.  ‘Passage’ has some inadvertent character humor, but it is a deadly serious, socio-political drama.

A ‘fantasia,’ according to Chen with glancing reference to themes in ‘E.M. Forster’s “A Passage to India” about the inescapable injustices ignited by England’s colonization of India in the 19th Century.

Chen deals with our current era of colonization, xenophobia and the politics of ‘the other.’  An ideological axis of evil, however veiled by seditious regimes vying for total control.  In dramatic lit terms, “Passage” is closer to the political theater of such works as Marc Blitzstein’s 1938  ‘The Cradle Will Rock” confronting top to bottom societal corruption (which was shut down initially by the WPA) or Larry Kramer’s AIDS polemic “The Normal Heart”-  productions with undecorated social messages delivered in theatrical confrontational ways.

The citizens of the occupied country are indeed ‘the other’ in their own land and the rulers employ micro- and macro aggressions to strip them of their humanity. Meanwhile the culture wars rage and  Chen’s characters draw ‘us’ or ‘them’ political fights that  are always one sentence away from getting ugly and personal. Sound familiar?

The pawns in this drama are only identified by letters. The play opens as Q (Justin Jain) is traveling to Country X for the first time to join his fiancée R (Ross Beschler) and along the way he befriends F (Krista Apple) on a teacher returning to the colonized country, but can’t really tell him why. Q is looking forward to joining his fiancé but nervous about adjusting to a culture he doesn’t yet know.

H (Taysha Marie Canales) and M (Keith Conallen) are colleagues and soon to be former friends. At a social gathering they get into an ‘worldview’ argument about the political landscape of Country X. The have a circular fight about protesters who are now in the streets over a teenager being thrown in jail for steeling batteries.

They are joined by B (Lindsay Smiling) the most esteemed cardiac surgeon in Country X, who wants to bridge divides at least with his peers and tries to be the diplomat to no avail.  Later, B’s  view changes when he is reprimanded at the hospital where he works for being late due to the roads being blocked because of the protests.  Then when he attacked at gunpoint, but he is the one who ends up in jail, he is a disposable 2nd class citizen. F (Krista Apple) meets him in the Temple and they are attracted to each other but events have them to distrust each other.

Meanwhile, Q and R are reunited lovers, but Q can’t ignore the social injustices he sees in the country and questions R’s acceptance of them.  R asks him coyly “Don’t tell me I have to walk on eggshells around you” and Q responds, “only if you say the right thing.” R and J (Jaylene Clark Owens) justifies the jailing of the teen with her colleague R, and they justify towing Country Y’s nationalist line.  Q sets forth into the ‘cave’ to go it alone, to begin his transformative moment in a new country and  is confronted with a monstrous entity.

Whatever appearance of stability is, the grotesque mask that obscures police state tactics already at work. And indeed the utopian scenarios by Country X fall away to get to the ultimate political end game. Chen keeps the audience on unmoored theatrical footing, as we try to connect with what is happening and unravel the implications.

B seeks refuge in the Temple and talks about a time when people were more meditative and private about their inner lives and now the inner world becomes an outer commodity- or you lose, socially, professionally, emotionally and certainly politically.
The temple and the cave, cultural touchstones are the backdrops for all the unfolding existential journeys of these amorphous characters.  The maze is ultimately unknowable metaphysical space that is in the end no sanctuary from the dystopian void. Adding to the mysteries, Sara Gliko morphs into other creatures,  a gecko and a mosquito, making pointed comments like a survivalist Greek chorus.

As simmering as all of this surreal landscape is, Zizka’s focused direction is naturalized and a balancing act of Chen’s colliding polemics, while respecting Chen’s jarring narrative structure, some scenes striking as overwritten, others  underwritten.  The cast fully committed in every moment.

Meanwhile, Phil Colucci’s sound and music design transports in tandem with Matt Saunders set is sculpted black and white spaces, with geometric floor designs for the temple and the cave labyrinth carved out with lighting.
Zizka continues to develop plays with substantive social justice themes and this is certainly one, even as it almost collapsing under its own weight. Chen seems to abandon his characters and throw a wrench into his own narrative as Sara Gliko directly addressing the audience ala a motivational speaker in an extended, and unnerving way, even inviting us to leave or stay.  I, for one, had a squirming dislike for this final scene & yes wanted to leave the theater. Other audience members who were bounding to their feet to applaud, were clearly moved by this vaporizing of the fourth wall.

A week later any bets I wasn’t the only one still think about Passage and these characters trying to survive the looming monsters of oppression from without and within.

“Passage” is a brave theatrical experiment by Chen and some of it probably should be more narratively focused,  but without doubt it is daring theater by Chen, Zizka and Hothouse players.   They are committed to new theater that isn’t, by design, meant to be easily, or safely, deciphered.  And that’s what living theater in a hostile, anti-intellectual, oppressive and politically insane time is all about.