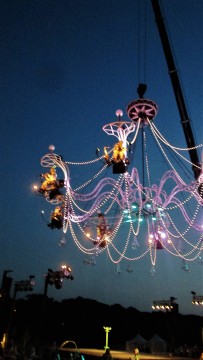 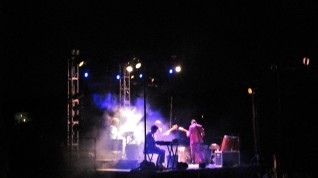 The 100 ft. arm of a crane loomed on a pristine bank of the Schuylkill River, ready to hoist the giant chandelier of for French troupe Transe Express PIFA musical spectacale the Cristal Palace a centerpiece 10-day performance that took place each night of the 10 day Philadelphia International Festival of the Arts.

The chandelier was actually a flying bandstand for the brass and string musicians who sat perched in metal nests at the end of the its ornate branches. on stage below them other musicians as well as a roaming cast of dancers, aerialists, singers and street performers portraying a gallery of characters.

The show opened with the Nobuntu, a capella quintet from Zimbabwe,  transported with a set of joyous and inspiring harmony and folkloric vocalizations. At twilight, the Palace chandelier was in motion over the stage and the musicians’ playing unfazed as they were careening around on the chandelier in tight musical medleys with the rhythm, string and keyboard musicians on the ground

Their playlist was an era transporting musical journey with everything from psychedelic gypsy rock, funkadelic and they saved the most muscle for some extended jazz journeys to cap things off, echoes of birth of the cool. When the big-band swing came in with a nod from the drummer to Glen Miller’s Sing, Sing, Sing, the crowd was on its happy feet. At one point the keyboardist  busted out his accordion and cued a  Klezmer waltz that led to a scene of music and visual European bohemian magic.

Meanwhile the cast of Comedia d’elle arte street performers from move thought the crowd. Mimes and dancers in various costumes, engaging the crowd, a chorus line of Alpine folk dancers, a glitter-bodice Moulin Rouge courtesan, a musty travesti clown, a glitter queen with frizzy hair. Dance mise-en-scenes ala Moulin Rouge from Can-Can gender fluid kick-lines, to sousey physical comedy as the bands, aloft and on the ground stage strung together street serenades, gypsy fiddling, brassy chandelier fanfares. A bit of a flyby of French social and folkloric dance history with Alpine polkas, Moulin Rouge Can-Can kick lines, Paris tango as well as Americana renditions of the Charleston, Lindy and  flashdance,

Vituouso trombonist Ernest Stewart came on in the finale with a ‘Soul Train’ theme intro, then the rest of the band burst out with funkadelia ala Isaac Hayes, the dance line in full soul diva & divo mode. As much as anything Cristal Palace broke out in a bacchanal dance party.

So infectious the esprit that toddlers and kids were the first ones to run around and dance, some mimicking the street performers, others who just naturally have the moves. At first glance Cristal Palace may have looked like a gimmicky PIFA spectacale, but by the middle of the performance it became a bona-fide happening in Fairmount Park