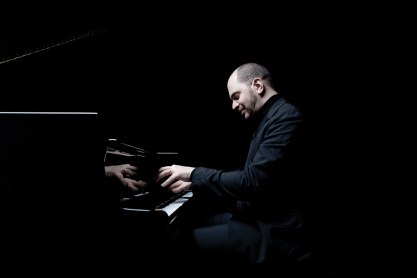 Suite no. 2 from Daphnis and Chloé

Cincinnati Symphony Orchestra music director Louis Langrée returned to the Philadelphia Orchestra podium to conduct a sumptuous evening French repertory in what was one of the concert highlights of the year in Philadelphia across the board. Langrée also renowned as director of Lincoln Center’s Mostly Mozart Festival, brings the same vibrancy to a program of Saint-Saens, Franck, Dukas and a Ravel’s Suite & the marquee draw of Ravel’s monumental concerto performed by Russian pianist Kirill Gerstein.

Langrée is a debonair, warm presence on the podium as he ignites Saint-Saëns’ Danse Macabre with a dimensional orchestral clarity. His tempos blazing a revelation and framing an equally fiery violin solos by concertmaster Juliet Kang, Kang’s signature lush tone and fiery fiddler drive in an altogether thrilling performance.

Next, Caesar Franck’s aggressive orchestral The Accursed Huntsman, a work full of brass and percussion pyrotechnics and other symphonic effects that fit the season. All fueled at full volume in this performance, but Langrée’s   fluid detailing during the less bombastic  passages to make it more than a showy showpiece.

Dukas’ Sorcerer’s Apprentice is pure fun and fitting for October’s last weekend and the orchestra, a Halloween seasonal favorite with those famous harrumphing bassoon motifs known to kids of all ages from Walt Disney’s Fantasia with Mickey Mouse commandeering a brooms to carting water. And child’s play with virtuoso bassoonists Daniel Matsukawa, Mark Gigliotti and Angela Smith (a scene stealing growler bassoon) not beyond vamping, but Langrée again giving equal luster to the rest of the piece.  (at some point a surreal moment did come for some of us in the audience when a mouse scurried across the aisle.)

Kirill Gerstein’s interpretation of Ravel’s masterpiece Piano Concerto in G, was the concert highlight of an evening of stellar musicianship. Gerstein’s command of every aspect of this masterpiece hypnotic to watch and his precision and interplay with the orchestra. In this performance the voicings of  jazz sinfonia deftly essayed by Gerstein. But all of the dimensions and mystique of this concerto inspiring his technical artistry.
Thrilling duet passages between Gerstein and principal harpist Elizabeth Hainen

Langrée stayed in Ravel’s musical universe for the altogether magical performance of Suite no. 2 from Daphnis and Chloé, Ravel’s illusory orchestral that still can has the contact high of a belle epoch opium den, that only the lusty applause by this audience would crash one back to reality. The orchestra just luminous throughout and among the outstanding soloists principal flute Jeffrey Khaner and actually all the way down the woodwinds.

In the three curtain calls Langrée expressed his already palpable rapport with the Philadelphians, shaking hands with several players and cuing every section of the orchestra to take ensemble bows.